The Charleston Basket Brigade Receives Grant from The Exchange Club of Charleston, SC 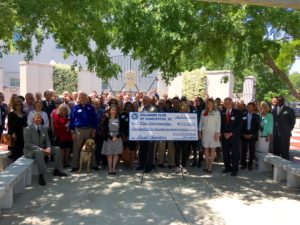 The Momentum team is excited to share the Charleston Basket Brigade co-founded by our Agency Principal, Pam Hartley, accepted a $3,000.00 grant from The Exchange Club of Charleston, SC during the club’s annual grant luncheon held at The Citadel Alumni Center.

This was the first time the Basket Brigade applied for and received a grant from the esteemed service club. Michelle Scarafile, CBB co-founder, was out of the country and unable to attend but was there with us in spirit! 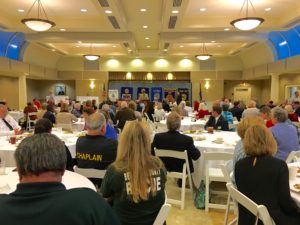 A total of 74 charities were selected to receive 2016 grants from 141 applicants. A whopping $704,219.00 in checks were handed out today as a result of the money raised at the Exchange Club’s 2015 Coastal Carolina Fair. The club also supports many other charity, emergency and community initiatives each year in addition to the 74 grant recipients.

“Most people may not realize that the Coastal Empire Fair is such an enormous fundraiser,” said Hartley. “I had no idea how much money was raised and that the sole purpose of the fair is to give back to the community. Wow.” 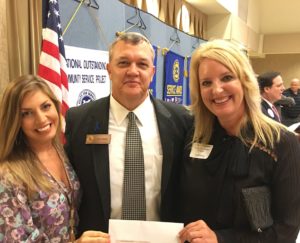 With a motto of ‘Unity for Service’, Exchange Club members put in a total of over 20,000 hours of volunteer time at the fair each year to raise more than a million dollars, which goes right back into the community to help those in need.

Scarafile added, “The club’s hard work, service and dedication to the Lowcountry impacts such a large number of people in the surrounding counties. The ripple effect is tremendous.”

“I was overwhelmed today to hear the names of the 74 charities in attendance as well as the specific grants the club provides,” said Hartley. “From computers, cribs and dental services to gardening equipment, safety vehicles, horse care, hospice, rescue inhalers, food and more – The Exchange Club’s reach is so expansive in our beloved community. The grants generated from the Coastal Carolina Fair each year is evidence of our community at work, helping one another.”

We encourage everyone to spread the word and attend the Coastal Carolina Fair this year October 27-November 6, 2016. Special thanks to the fair sponsors, who also make these grants possible.

Scarafile said, “We are beyond thrilled to be one of 74 charities recognized. To every single person that made this possible – thank you. Our gratitude is endless.”